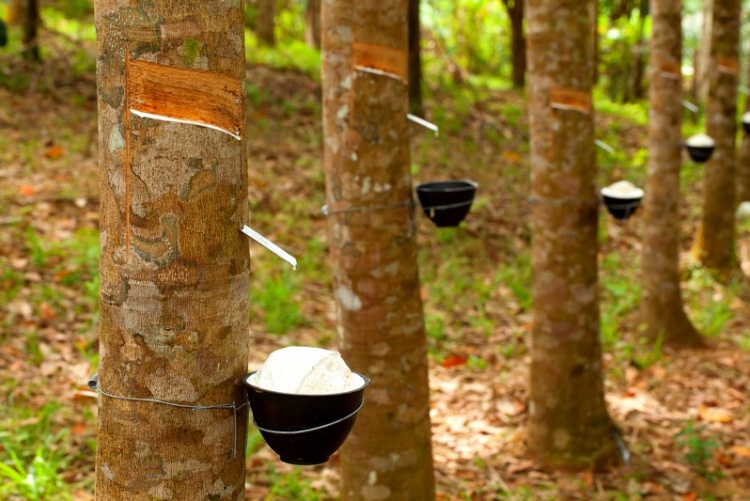 Natural rubber comes from the Hevea Brasiliensis plant of Latin America. It was trialled in Côte d’Ivoire in the 40’s but cultivation was undertaken in 1953 by Compagnie Française de Caoutchouc d’Extrême-Orient et d’Afrique and Société Africaine de Plantation d’Hévéa (S.A.P.H) a year later.

Following its independence in 1960, Côte d’Ivoire developed the natural rubber sector through the following actions:

The liberalisation of the sector took place in 1994 and was followed by a restructuring period which ended in 2001, against a backdrop of falling world market prices. Fortunately, a five-year long campaign to promote village plantations and an intense promotion of the sector between 2008 and 2012 lead to a revitalization of the natural rubber sector, mainly under the authority of the Government and the Association of rubber professionals (Association des Professionnels du Caoutchouc Naturel-APROMAC). A recent reform aims to further stabilize the sector.

Importance of natural rubber to the economy:

Côte d’Ivoire is the first African producer of natural rubber and the 7th worldwide.

Natural rubber competes with other cash crops such as cocoa or palm oil and usually occupies the 3rd or 4th place in the Ivorian economy. In 2013, it accounted for 6% of the country’s exports.

Natural rubber is the livelihood of about 800,000 people who participate in various aspects of the value chain. It is believed that in rubber production zones, the level of poverty is around 30% as opposed to an average poverty rate of 48% for the rest of the country.

Production of natural rubber takes place in 18 geographical rubber sectors which represent 534,000ha of planted areas. Land surfaces devoted to rubber evolved from 1,600ha en 1953 (the early plantation owned by Compagnie Française de Caoutchouc d’Extrême-Orient et d’Afrique) to 39,545ha by the time the sector was liberalised in 1994. The plots mainly belonged to agro-industrial groups who spearheaded the new rubber policy in Côte d’Ivoire.

However, due to their aging crops and industrial equipment, agro-industrial groups were soon overtaken by village and independent smallholders who currently generate nearly 80% of the total national production. Indeed, village farms went from 43,500ha in 2000 to 62,924ha in 2005 and 78,435ha in 2007.

The Hevea tree is grown in combination with various food crops, especially during the first three years following the creation of the farm.

In 2016, APROMAC recorded 152,000 smallholders who usually manage farms ranging from 1 to 15ha. They are represented by various associations and organized into geographical sectors of 5,000 to 10,000 farmers. They benefit from extensive training provided by APROMAC approved extension workers at a ratio of one extension worker to 300 farmers.

As a result of the extensive research which is funded by the State and the rubber sector, CNRA (the National Center for Agronomic Research) has identified 13 high-yielding clones out of more than a hundred varieties.

Farmers have a guaranteed outlet as their entire production is purchased by rubber processors. Under the guidance of APROMAC, a remunerative purchase price is agreed by all the parties. This price is based on the FOB SICOM price and is split between farmers (61%) and manufacturers (39%).

The European tyre industry represents the biggest market for the natural rubber of Côte d’Ivoire (70% of exports). Asia is the main destination for the rest of the Ivorian production. Only a residual volume is used locally.

The rubber sector has 19 processing units with a total potential transforming capacity of 520,000 tons. The primary product is processed and exported as TSR rubber.