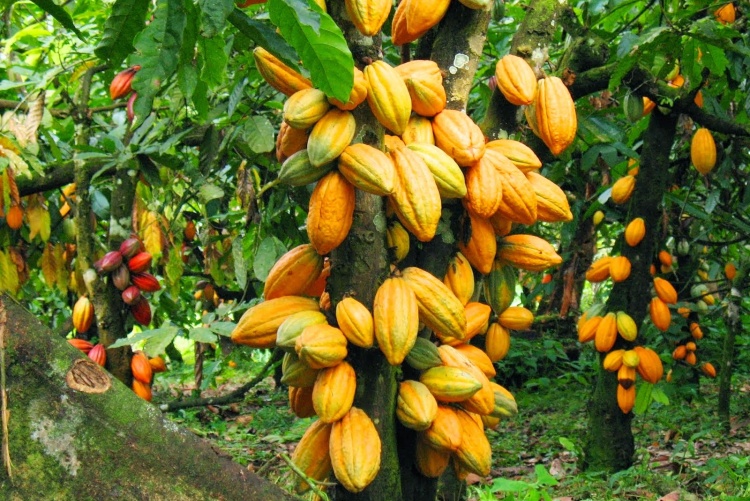 Cocoa is a perennial crop which was cultivated and consumed by the Mayas of South America, as early as 500 or 400AD. In 1888, it was introduced in Aboisso (south-east region of Côte d’Ivoire) by French explorers Verdier and Brétignière. At the beginning of the 20th century, European entrepreneurs left the early plantations to indigenous smallholders and moved to the soil-rich forests of the south-west and centre-west.

Between 1955 and 1970, Côte d’Ivoire’s production tripled, mainly thanks to the involvement of local cocoa growers. Hence, Côte d’Ivoire was able to compete with neighbouring Ghana, which held the leading position for cocoa production in those days.

During the 1978/79 season, Côte d’Ivoire overtook its rival, with an annual production of around 400,000 tons against 250,000 tons for Ghana. Côte d’Ivoire has since maintained this global leadership.

Importance of coffee in the economy:

Cocoa plays a central role in the economy of Côte d’Ivoire, accounting for 15 to 20% of the GDP and 40% of export revenues. For instance, in 1998, 789 billion CFA francs were generated by the sale of cocoa. In 2013, cocoa exports represented 26% of the country’s total exports (both agricultural and mining).

The most important cash crop in Côte d’Ivoire is often described as the “lifeblood” of the Ivorian economy or the “brown gold”, which helps to fund numerous infrastructure projects as well as support other sectors in the country. Moreover, around 6 million people earn their livelihoods from cocoa.

On the world stage, Côte d’Ivoire is the first cocoa exporter and supplies more than 40% of this commodity to the international market.

Cocoa grows on three different continents, in the warm lands surrounding the Equator. In Côte d’Ivoire, the best weather and soil conditions for cocoa cultivation are found in the southern region, in what is known as the “cocoa belt”, which stretches from the border with Ghana, in the East, to the mountainous regions of the West. The surface of land used for cocoa production is about 2.5 million hectares (2011/12 figures), which represents 56% of all permanently cultivated land. The main production zone is the central-west region, which supplies 36% of the total national production.

A cocoa tree is usually productive for 25 to 30 years, with the first fruit (cocoa pods) appearing as early as a year after the tree is planted, for the newer varieties.

Cocoa is produced by around one million farmers who each work on small plots averaging 2.5 hectares.

The main harvest period (campaign) stretches from October to March while the intermediate campaign is from 01 April to 30 September.

Production has been increasing steadily, from 725,393 tons in 1990 to 1.7 million tons in 2014. Current production roughly remains at the same levels, with an average yield between 0.74 and 1 ton per hectare.

Côte d’Ivoire produces the forastero variety which is more common in West Africa and which accounts for about 90% of the cocoa traded around the world.

During the harvest, the wet cocoa beans are removed from the cocoa pods manually. They are then fermented are sun dried by farmers before being sold to itinerant buyers or traitants. If need be, they can be additionally prepared for exportation.

70-80% of the harvest is sold early to minimize fluctuations in international prices, thus guaranteeing the price paid at the farmgate.

Around one third of Ivorian cocoa is exported to the USA. Other export destinations include Europe (i.e. The Netherlands, Germany, France) and Asia.

Most of the cocoa produced is exported as beans (70%) and semi-finished products (30%). Local processing, which is for the most part undertaken by international corporations, is strongly encouraged by Ivorian authorities, to add value to the cocoa sector.

Following the recent inauguration of a chocolate manufacturing plant, it is believed that a greater proportion of the national production will be processed locally.